Why do you cut down trees?
We often get asked why we cut down trees at Rivington.
It can be an emotive question, we often get told ‘birds live in trees, you can’t cut trees down’. Our fantastic local wildlife does makes its home in the woodlands at Rivington so surely we should leave the woodlands alone?
Well, firstly we’d like to go on record saying we love the woodlands within the Gardens and all the creatures which call them home. We want to manage the woodlands for the benefit of our wildlife and we are working to increase the number and species diversity of the creatures which make their home here.
The work we have done over the last few years in the gardens has had two clear objectives.

The first one is very straightforward and relates to the rich history of the Gardens:
Lord Leverhulme created the Gardens over a 25-year period from 1900 till his death in 1925. The Gardens feature a collection of different landscapes and structures. They were created in partnership with renowned Landscape Designer Thomas H. Mawson and are therefore historically significant. As a result the Gardens are Grade II listed and contain a further 11 structures which are individually Grade II listed. This means the Gardens are nationally important and that the structures – many of which had been condemned – should be rescued.
Following years of neglect, the Gardens were heavily overgrown with Rhododendron and other vegetation. Paths had been lost/hidden and the vegetation was slowly eating its way into the structures accelerating their decline.
In the early 2000’s the Rhododendron were discovered to carry the disease Phytophthora ramorum. Sometimes referred to as ‘Sudden Oak Death’ the disease actually feeds upon a variety of species and can ultimately kill the tree it infects. As a result, DEFRA served United Utilities with an order requiring the removal of the Rhododendron. The process took a couple of years and for the first time in a generation exposed areas of the Gardens which had long been hidden.  Areas which had been lost could now be explored once again. Crucially this process also highlighted the poor condition of the structures, the damage being done by vegetation and the urgent need for a rescue package. Rivington Heritage Trust and United Utilities worked together with Groundwork Cheshire Lancashire and Merseyside to secure funds to undertake that work.
£3.4m was secured from the Lottery Heritage Fund as part of a £4.2m rescue package and work began in August 2016.
This brings us to the first reason for the removal of trees and vegetation. In order to save the listed structures, we had to remove the vegetation which had spread its roots into the Summerhouses, loggias, walls and gateposts. We also had to make room for the vehicles and equipment we needed to access, conserve and protect the structures. It was impossible to replace the concrete roof on a Summerhouse without first ensuring it could be reached safely. In each case we carefully surveyed each structure and how we might reach it before taking out the minimum number of trees and shrubs necessary to undertake improvement work.
This tree work took place in early 2017 and work began on the structures the following spring. We experienced a few delays, not least the fires that year which nearly reached the Gardens and work on the structures was successfully completed in Autumn of 2019. 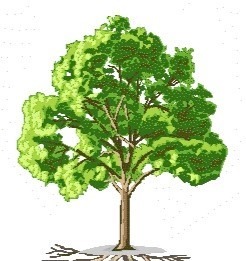 It has a wide, well spread canopy which will help it to catch lots of light from the sun in its leaves, in turn it should also have a well-developed and extensive root system spreading out in all directions – much wider in fact that the branches above them, which helps stabilise the tree. It will take up lots of water from the soil, its roots will help aerate the soil, have a symbiotic relationship with a variety of fungi and will provide much needed habitat for insects and burrowing mammals. Its rich canopy will provide habitat and food for even more insects, small mammals and birds. If it’s a native tree species, for example an Oak tree, then a mature healthy tree could help support an incredible 1,600 other species.

A Healthy Woodland has a number of key, visible, characteristics:
• Species Variety – A mix of native tree species, shrubs, wildflowers, grasses and other vegetation is essential. Too many trees of one species means less variety of fungi, insects and other creatures. Our native wildlife thrives best in complex varied woodland where a variety of food is plentiful throughout the seasons.
• Varying heights of trees and shrubs as well as occasional clearings is essential, many of our insect and bird species feed and nest at different heights. If the trees are all one height, then the lack of variety means there is less suitable habitat and significantly less food available.
• When there is a mix of woodland, grasslands and small bushy areas wildlife can thrive in huge numbers. Patches of bracken, small trees, giving a mixed habitat, creates a greater concentration of different species.
• Rotting wood and leaf litter is also essential, it provides food for fungi and insects, foraging for burrowing mammals and birds – for example Woodpeckers which dig into the rotting wood to feed on insects. As fungi and insects digest the rotting timber essential nutrients are returned to the soil.
• The presence of non-native trees and shrubs can be a problem, because while they can provide cover for wildlife our native insects will not feed upon them. This means too many non-native species can greatly reduce the amount of food available. The Rhododendron which once blanketed the Gardens looked lovely but unfortunately they were very poor as a habitat. Furthermore, Rhododendron actually acidifies soil making it inhospitable for some of our native trees, shrubs and wildflowers.

The following picture, taken in the woodland above the Bungalow, demonstrates how a healthy woodland can look: 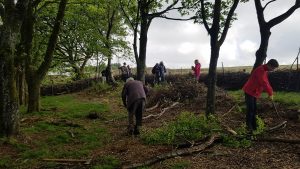 Please note:
• The widely spaced trees with wide spreading canopies;
• Lots of side branches;
• A good covering of vegetation on the ground;
• Gaps in the canopy to let light in to the ground and the plants growing there;
• The mix of tree species;
• The variety of heights of the trees; and
• The trees in this woodland should also have well developed sprawling root systems.

Now contrast that image with the one below. This picture shows the woodland next to Levers Bridge in the Gardens: 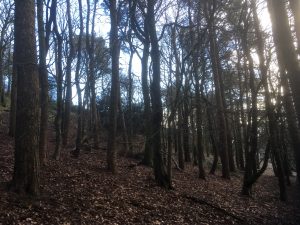 Please note:
• The tall thin trees, growing closely together, the canopy of each tree is small and restricted by the growth of adjacent trees, very little light is penetrating below the canopy;
• The lack of side branches, light does not penetrate the crowded canopy and therefore the trees are competing for light by growing taller, no energy is going into developing a wider canopy;
• The trees are not capturing sufficient light to be healthy, and the energy they are capturing from the sun is being used to grow taller;
• A lack of energy also means the trees roots are likely to be less developed, this means food is further limited and also that the trees are less stable, particularly in the high winds which occasionally buffet the Terraced Gardens;
• As a result, the ground tends to be bare soil. This leads to increased erosion, particularly on steep slopes in heavy rain and the trees, weakened over time, frequently fall over [You can see this clearly in the next picture]; 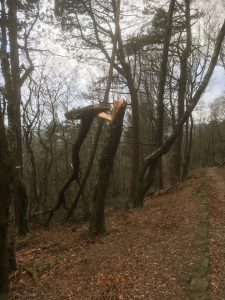 • Little or no vegetation on the ground means the habitat is quite poor, there is a distinct lack of both cover and food for insects, small mammals and birds. This in turn leads to a lack of species diversity and a reduction in the number of creatures present. Consequently, this will also lead to a lower number of predator species in the area.

Over the last three years we have undertaken surveys of each woodland block within the Gardens and it is apparent that this is just one of a number of woodlands which is in poor health. The woodlands within the upper Gardens are generally in better health, largely due to the work done during the project so far. The woodlands below Roynton Lane, on the steeper hillsides, do though still suffer from many of the problems highlighted here.

So, how can we improve the woodland health within the Gardens for the benefit of wildlife?
The solution is quite simple and threefold:
1. We selectively take out the weaker trees and prune some of the side branches on the remaining trees. This allows space for other trees to ‘spread out’ and become healthier, it will, in turn, increase the amount of light which can reach the woodland floor.
2. We take out some of the small, self-seeded birch trees which have become prolific since the Rhododendron were removed. These spread quickly and grow very close together. Typically, we remove the weaker specimens leaving the remaining healthier trees with space to grow into. This also allows space for other species to grow, thereby increasing the diversity of the woodland.
3. Finally, we plant a variety of native wildflowers, grasses and small shrubs into the newly created space, with more light they become established and provide some much needed food and cover

The branches we take down are placed in ‘brash boxes’ or ‘dead hedges’ within the woodland to provide food and habitat cover for insects, small mammals and birds while the larger logs are split and dried to provide firewood for the log burner in the Pigeon Tower and timber for charcoal making – a volunteer activity which helps create funds for Rivington Heritage Trust.
Ultimately our aim is to improve the overall health of the woodlands and to increase the variety and number of species they support.